Nearly One-Quarter Of Workers Have Left A Job Due To A Bad Commute, According To Robert Half Survey
- Chicago, Miami, New York and San Francisco have the most professionals who have quit because of a bad commute
- 39 percent of employees feel traveling to and from the office has gotten better in the past 5 years; 22 percent said it's worsened
- Seattle, Denver, Austin and San Francisco have the most professionals whose trip to work has gotten worse over the last 5 years
- 60 percent of employees reported their company hasn't taken action to alleviate commute concerns

MENLO PARK, Calif., Sept. 24, 2018 /PRNewswire/ -- The drive to work may be driving some professionals to quit, suggests new research from global staffing firm Robert Half. More than one in five employees (23 percent) have left a job because of a bad commute. Among workers in the 28 U.S. cities surveyed, respondents in Chicago, Miami, New York and San Francisco have most often resigned for this reason. 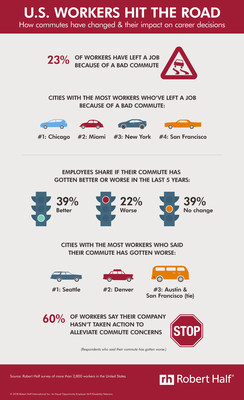 While 39 percent of professionals reported their travel to and from the office has improved over the past five years, 22 percent said the trip has gotten worse. Of those who noted a negative change in their commute, 60 percent said their company has not taken steps to reduce the burden on employees.

View an infographic about commutes. Data tables with a breakdown of the results by gender and age are also available.

Workers were asked, "Have you left a job because you had a bad commute?" Their responses:

Workers were also asked, "Has your commute gotten better or worse over the last five years?" Their responses:

"Commutes can have a major impact on morale and, ultimately, an employee's decision to stay with or leave a job," said Paul McDonald, senior executive director for Robert Half. "In today's candidate-driven market, skilled workers can have multiple offers on the table. Professionals may not need to put up with a lengthy or stressful trip to the office if there are better options available."

About the Research
The survey was developed by Robert Half and conducted by an independent research firm. It includes responses from more than 2,800 workers 18 years of age or older and employed in office environments in 28 major U.S. cities.