MENLO PARK, Calif., Feb. 21, 2017 /PRNewswire/ -- Employee productivity can take a big hit when the boss leaves, a new survey shows. According to research from staffing firm Robert Half, both workers and CFOs believe having a vacant senior manager role has an adverse impact on the team's efficiency, though those in leadership (70 percent) are likelier to find it an even greater problem than staffers (59 percent). 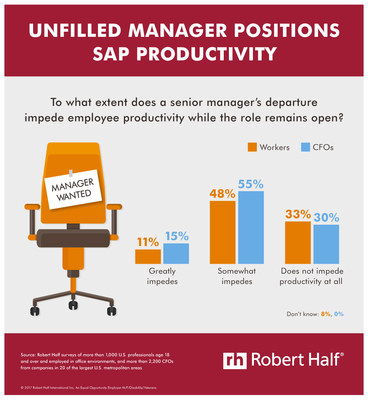 Decreased morale and motivation were the biggest reported causes of lost productivity among both groups, followed by concerns over increased workloads and fear about job security or relationships with the new boss.

"When there are changes in management, employees often feel distressed by the unknown," said Paul McDonald, senior executive director at Robert Half. "To help ease the transition and allay any concerns, it's essential for employers to communicate openly and often with staff."

Workers and CFOs were asked, "To what extent, if any, do you believe a senior manager's voluntary or involuntary departure from the organization impedes employee productivity while the role remains open?" Their responses:

Those who said a senior manager's departure can impede productivity while the role remains unfilled were also asked, "Which one of the following do you believe is the greatest cause of lost productivity?" Their responses:

"If a senior manager leaves a company, the focus should be on keeping teams motivated and engaged while quickly staffing the opening," McDonald said. "Employers who don't address workers' concerns risk a decrease in employee performance and an increase in turnover."

Managers can avoid a drop in productivity and help employees effectively navigate changes in leadership by heeding this advice from Robert Half:

About the Research
The surveys were developed by Robert Half and conducted by independent research firms. The survey of workers includes responses from more than 1,000 U.S. professionals age 18 and over and employed in office environments. The CFO survey is based on telephone interviews with more than 2,200 CFOs from a stratified random sample of companies in more than 20 of the largest U.S. metropolitan areas.

About Robert Half
Founded in 1948, Robert Half is the world's first and largest specialized staffing firm. The company has 325 staffing locations worldwide and offers job search services on its divisional websites, all of which can be accessed at roberthalf.com. For career and hiring advice, visit the Robert Half Blog at roberthalf.com/blog.