RULES OF ENGAGEMENT: Survey Suggests Workers More Engaged Now Vs. Three Years Ago, But Executives Worry It's Still Not Enough

MENLO PARK, Calif., March 14, 2017 /PRNewswire/ -- First the good news: Sixty percent of CFOs interviewed for a Robert Half survey think their workers are more engaged on the job compared to three years ago. The not-so-good news? The majority (52 percent) are concerned this may still be insufficient. 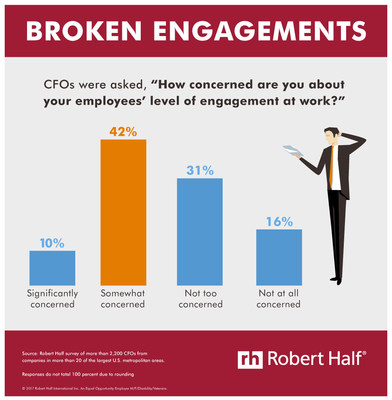 Recent findings from a separate study help to underscore the point that executives should not take employee engagement — or loyalty — for granted. About one-third of professionals surveyed for a study on worker satisfaction and engagement from Robert Half and Happiness Works indicated that they are considering leaving their jobs in the next six months.

View an infographic of the CFO survey findings.

CFOs were asked, "Compared to three years ago, do you think employees are more or less engaged at work?" Their responses:

CFOs were also asked, "How concerned are you about your employees' level of engagement at work?" Their responses*:

"Engaged employees are more productive employees," said Paul McDonald, senior executive director at Robert Half. "They typically are also more dedicated team members and less likely to jump ship. This is an especially important consideration for businesses in the current environment of low unemployment and a shortage of skilled workers."

Added McDonald, "Employees are more likely to be engaged when they are given new challenges and regular performance feedback. They will also find more meaning and motivation in their work when they understand how their contributions fit with the overall goals of the business."

Where Engagement Is Highest

The CFO survey from Robert Half also offers insight on which U.S. cities have the most engaged workers. According to the research, the top five cities are: 1) Los Angeles, 2) San Francisco, 3) Chicago, Phoenix and St. Louis (tied).

The survey was developed by Robert Half and conducted by an independent research firm. It is based on telephone interviews with more than 2,200 CFOs from a stratified random sample of companies in more than 20 of the largest U.S. metropolitan areas.

Founded in 1948, Robert Half is the world's first and largest specialized staffing firm. The company has 325 staffing locations worldwide and offers job search services on its divisional websites, all of which can be accessed at roberthalf.com. For career and hiring advice, visit the Robert Half Blog at roberthalf.com/blog.