Small And Midsize Businesses Sound Off On Hiring
Nearly Two-Thirds Report Problems With Their Hiring Process; Eight in 10 Have Made a Bad Hire

MENLO PARK, Calif., March 21, 2017 /PRNewswire/ -- Building a successful business depends largely on hiring the right people. But as small and midsize firms expand, how strong is their hiring process? A new survey from global staffing firm Robert Half aimed to find out. Among the results: 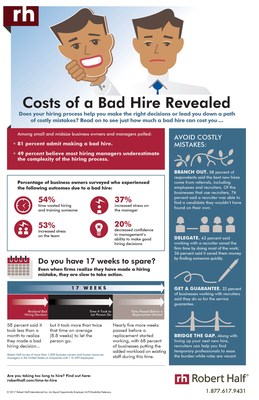 Robert Half's Small and Midsize Business Hiring survey explores perspectives of business owners and managers related to a variety of hiring issues. More than 1,000 business owners and human resources managers of United States firms ranging from one to 499 employees were surveyed by an independent research firm to gather relevant data.

Several factors complicate hiring in smaller organizations, according to Paul McDonald, senior executive director at Robert Half. "Some firms lack dedicated recruiting staff or a human resources function altogether," he said. "Multiple demands on a business owner's time also can pull attention away from recruiting and cause it to fall to the last priority."

Delays to Correct Mistakes
The research also found that while a bad hire could be identified rather quickly, correcting the mistake took longer.

Minimizing the Risks and Costs of a Bad Hire
The survey results indicate several ways businesses can address deficiencies with their hiring process and minimize risks of making a bad hire.

About Robert Half
Founded in 1948, Robert Half is the world's first and largest specialized staffing firm. The company has 325 staffing locations worldwide and offers online job search services on its divisional websites, all of which can be accessed at roberthalf.com. For career and hiring advice, visit the Robert Half blog at roberthalf.com/blog.