Should You 'Friend' Your Coworkers?
Many Employees Think It's OK to Connect With Colleagues on Social Media, but Not All Managers Agree

MENLO PARK, Calif., Sept. 12, 2017 /PRNewswire/ -- Do workers "like" the idea of office friendships crossing over into social media? More than seven in 10 professionals (71 percent) polled by staffing firm OfficeTeam said it's appropriate to connect with colleagues on Facebook. Slightly fewer feel it's OK to follow coworkers on Twitter (61 percent), Instagram (56 percent) and Snapchat (44 percent). In contrast, less than half of senior managers interviewed think it's fine to engage with fellow employees on Facebook (49 percent), Twitter (34 percent), Instagram (30 percent) and Snapchat (26 percent). 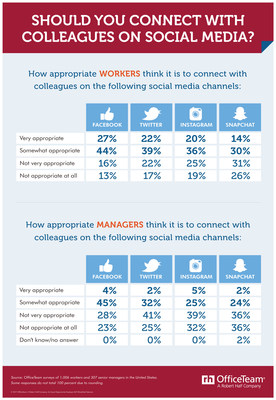 According to the worker survey, male employees and those ages 18 to 34 find it more acceptable to connect with colleagues on social media than their counterparts.

View an infographic of the research and data tables with breakdowns of the results by gender and age.

Workers were asked, "How appropriate do you think it is to connect with coworkers on the following social media channels?" Their responses:

Senior managers were asked, "How appropriate do you think it is to connect with coworkers on the following social media channels?" Their responses:

"While the lines between our personal and professional lives continue to blur, not everyone's comfortable connecting with colleagues on digital channels," said Brandi Britton, a district president for OfficeTeam. "Before friending or following someone, check if that individual has other coworkers in their networks. When in doubt, let fellow employees make the first move online."

Britton added, "Interacting with colleagues on social media can help build stronger relationships. But it should be done with care — you might not want to share everything with work friends that you would with closer personal contacts."

OfficeTeam offers the following don'ts when connecting with coworkers on social media, along with advice for what to do instead:

About the Research
The surveys of workers and senior managers were developed by OfficeTeam. They were conducted by independent research firms and include responses from more than 1,000 U.S. workers 18 years of age or older and employed in office environments, and more than 300 senior managers at U.S. companies with 20 or more employees.