Vacation Trends By City: How U.S. Workers Will Spend The Last Week Of The Year
35% of Workers Will Leave Vacation Days on the Table; New Yorkers Are Biggest Spenders While Raleigh, N.C. Workers Save

MENLO PARK, Calif., Dec. 6, 2017 /PRNewswire/ -- U.S. workers will not leave work very far behind – if at all – during the week of December 25, according to Robert Half's holiday survey. Eighteen percent of workers plan to work the entire week. Of the 67 percent of workers who will take at least part of Christmas week off, 64 percent will check in with the office while they're out. 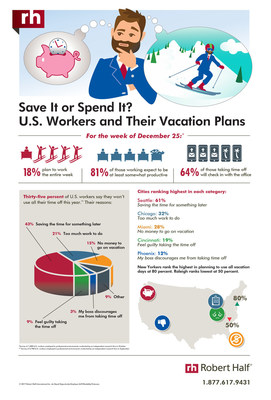 One-third of employees plan to take the entire week off. Sixty-one percent of this group say it's because their organization closes for the week; 79 percent of them note their firm pays employees during the closure. For people who plan to work, 81 percent expect to be at least somewhat productive. More than 1,000 people throughout the country were surveyed in October.

View an infographic of the findings: roberthalf.com/blog/management-tips/save-it-or-spend-it-us-workers-and-their-vacation-plans

Does the end of the year mean workers reach a zero balance on vacation time? Not necessarily, according to a separate Robert Half survey of 2,700 people from 27 major U.S. cities. Thirty-five percent say they won't use all their time off this year. Why not? The reasons vary.

Workers were asked, "What's the primary reason you don't use all of your vacation time?" Their responses:

Here are the highlights among the 27 cities:

Paul McDonald, senior executive director at Robert Half, offers the following points for workers and managers:

Robert Half commissioned an independent research firm for both studies.

Founded in 1948, Robert Half is the world's first and largest specialized staffing firm. The company has 325 staffing locations worldwide and offers job search services on its divisional websites, all of which can be accessed at roberthalf.com. For management and career advice, visit the Robert Half blog at roberthalf.com/blog.