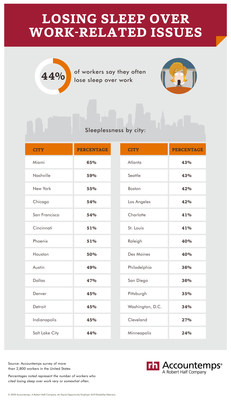 Workers were asked, "How often do you lose sleep over work?" Their responses:

Among those who lose sleep over work, the following were cited as the root causes:*

More than 2,800 workers were surveyed for the study. View an infographic to see cities where workers are losing the most sleep. See data tables that show reasons for restless nights broken out by age and gender.

"Work stressors can often follow you home, but try to check them at the door," said Michael Steinitz, executive director of Accountemps. "If you have too much on your plate, schedule time with your manager to discuss possible solutions to alleviate the pressure, such as delegating work to others, adjusting deadlines or bringing in temporary help."

Steinitz added, "Employee stress can lead to lower job satisfaction and engagement and higher turnover. Managers can support their teams by maintaining open lines of communication and planning regular check-ins to discuss workload and other worries."

More information about managing workplace stress can be found on the Robert Half blog.

About the Survey
The survey of workers was developed by Accountemps and conducted by an independent research firm. It includes responses from more than 2,800 workers across 28 major U.S. cities.

About Accountemps
Accountemps, a Robert Half company, is the world's first and largest specialized staffing service for temporary accounting, finance and bookkeeping professionals. The staffing firm has more than 300 locations worldwide. More resources, including talent and job search services, can be found at roberthalf.com/accountemps.