MENLO PARK, Calif., May 2, 2018 /PRNewswire/ -- The saying goes that a company is only as good as the people it keeps. But what if those people aren't fully engaged in their duties? According to research from staffing firm Accountemps, workers are disengaged at their jobs more than one-quarter (26 percent) of the time, on average, leaving the door open to lost productivity, low morale and turnover. 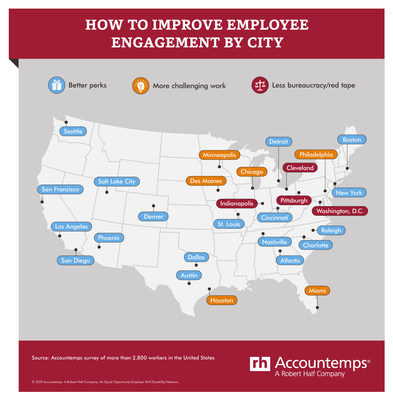 When professionals were asked what would make them more engaged at work, the responses included*:

View an infographic of top factors of employee engagement by city, and see data tables that show preferences by age.

Additional findings from the research:

Steinitz noted, "Managers should continually check in with their staff to gauge satisfaction levels and learn what motivates or potentially disengages them." He added that anonymous employee surveys could help unearth issues, particularly if workers feel uncomfortable offering candid feedback to their boss. "Employee engagement surveys are most effective when managers share the results and communicate how they plan to make improvements."

More advice on employee motivation can be found on the Robert Half blog.

The survey was developed by Accountemps and conducted by an independent research firm. It includes responses from more than 2,800 workers across 28 major U.S. cities.

Accountemps, a Robert Half company, is the world's first and largest specialized staffing service for temporary accounting, finance and bookkeeping professionals. The staffing firm has more than 300 locations worldwide. More resources, including job search services and the company's blog, can be found at roberthalf.com/accountemps.