MENLO PARK, Calif., Aug. 6, 2018 /PRNewswire/ -- Are professionals living to work or working to live? A new survey from global staffing firm Robert Half shows it's more of the latter these days. Nearly three-quarters (74 percent) of employees polled said they've achieved a good to excellent work-life balance. Forty-three percent think it's getting better compared to three years ago. 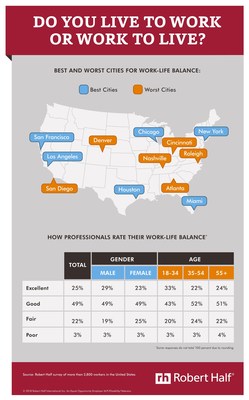 View an infographic of the best and worst cities for work-life balance along with data tables by age and gender.

"When employees can enjoy their personal lives alongside work responsibilities, they are happier and less stressed and bring their best efforts to the job," said Paul McDonald, senior executive director for Robert Half.

In fact, according to Robert Half research linking happy workers with higher productivity and increased loyalty, employees who felt they achieved symmetry between work and home were two times more likely to be happy on the job compared to those who reported they didn't.

So, who should be responsible for work-life balance? Thirty-nine percent of employees think it's the company's job. But in a separate survey, 26 percent of business leaders said they believe achieving that balance is primarily the employee's concern.

McDonald notes that management teams who support work-life balance recognize the benefits to their organization. "Companies that value the well-being of their employees are more likely to attract and retain skilled talent in today's competitive hiring environment. Basically, happy and well-balanced workers mean less burnout and turnover."

Advice for offering work-life balance options can be found on the Robert Half blog.

The surveys were developed by Robert Half and conducted by independent research firms. They include responses from more than 2,800 workers in 28 U.S. markets and more than 5,500 U.S. leaders across a variety of professional fields.

Founded in 1948, Robert Half is the world's first and largest specialized staffing firm. The company has more than 300 staffing locations worldwide and offers job search services at roberthalf.com. For additional career and management advice, visit the Robert Half blog at roberthalf.com/blog.