More Than Half Of Workers Take 30 Minutes Or Less For Lunch, Survey Says
-- The average lunch break lasts 39 minutes, down from 43 minutes in 2014
-- Professionals in San Francisco, Los Angeles and Miami lunch the longest, and the shortest in Salt Lake City, Des Moines and Cincinnati
-- 29 percent of employees admit to working during their lunch breaks

MENLO PARK, Calif., Sept. 10, 2018 /PRNewswire/ -- The lunch "hour" may be a concept of the past, new research from staffing firm OfficeTeam suggests. More than half of workers (56 percent) said their typical lunch break lasts 30 minutes or less. Among professionals in the 28 U.S. cities surveyed, those in San Francisco, Los Angeles and Miami take the longest lunches. Employees in Salt Lake City, Des Moines and Cincinnati have the shortest breaks. 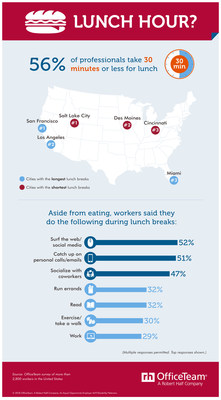 What are workers doing at lunch, besides eating? Respondents said they most frequently surf the internet or social media (52 percent), followed by catching up on personal calls or emails (51 percent). That's up from 27 percent and 25 percent, respectively, from a 2014 survey. Twenty-nine percent of professionals confessed to working during lunch.

View an infographic about lunch breaks. Data tables with breakdowns by age and gender are also available.

Workers were asked, "What is the average length (in minutes) of your typical lunch break?" Their responses:

Workers were also asked, "Aside from eating, which of the following activities do you usually engage in during your lunch break?" Their responses:*

"Even if only 30 minutes or less are available due to workloads or company guidelines, professionals should try to maximize lunch breaks to relax and recharge a bit," said Brandi Britton, district president for OfficeTeam. "These days, people are quick to turn to their mobile devices to pass the time, but it can be a nice change of pace and good for relationship building to eat with colleagues."

About the Research
The survey was developed by OfficeTeam and conducted by an independent research firm. It includes responses from more than 2,800 workers 18 years of age or older and employed in office environments in 28 major U.S. cities.

About OfficeTeam
OfficeTeam, a Robert Half company, is the nation's leading staffing service specializing in the temporary placement of highly skilled office and administrative support professionals. The company has more than 300 locations worldwide. For additional information, visit roberthalf.com/officeteam. Follow roberthalf.com/officeteam/blog for career and management advice.