Most Professionals Like Listening To Music At Work And Are More Productive When They Do, Survey Shows
- More than eight in 10 workers able to listen to music at work enjoy it
- Younger workers most apt to enjoy tunes while working
- 71 percent of employees at least somewhat more productive when listening to music
- Top genres that boost staff productivity: Pop, rock and country

MENLO PARK, Calif., Sept. 17, 2018 /PRNewswire/ -- Silence may be golden, but most workers feel they're more productive at the office when listening to music, new research from staffing firm Accountemps shows. Eighty-five percent of survey respondents who are able to do so say they enjoy turning on the tunes at work. Employees ages 18 to 34 appreciate music while working the most (95 percent), compared to those ages 35-54 (84 percent) and 55 and older (66 percent).

More than seven in 10 (71 percent) professionals said they are at least somewhat more productive when music is playing at the office, with pop, rock and country songs providing the biggest boost.

Workers were asked, "Does your employer have a policy about employees listening to music at work?" Their responses:

Workers who can listen to music at work were also asked, "Are you more or less productive at work when music is playing?" Their responses:

View infographics showing how music affects workers' productivity and the types of tunes that help the most.

"While music can be a stress reliever or source of motivation for many workers, it can be a distraction for others," said Michael Steinitz, executive director of Accountemps. "Those who want to listen to music in the office need to be aware of company policies and considerate toward their colleagues."

Accountemps offers the following do's and don'ts when it comes to listening to music at work:

The online survey was developed by Accountemps and conducted by an independent research firm. It includes responses from more than 1,000 U.S. workers 18 years of age or older and employed in office environments.

About Accountemps
Accountemps, a Robert Half company, is the world's first and largest specialized staffing service for temporary accounting, finance and bookkeeping professionals. The staffing firm has more than 300 locations worldwide. More resources, including job search services and the company's blog, can be found at roberthalf.com/accountemps. 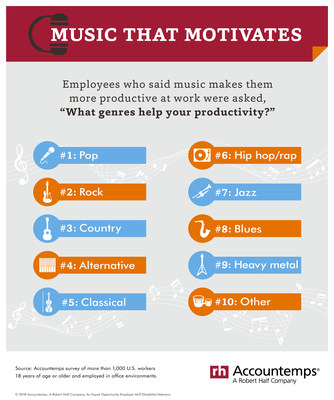