74 Percent Of Employees Tired On The Job, Survey Finds
U.S. cities with the sleepiest staff include Nashville, Austin, Denver and Indianapolis

MENLO PARK, Calif., Oct. 16, 2018 -- Drained at your desk? You're not alone. Recent research from staffing firm Accountemps suggests feeling worn out at work is a common occurrence among U.S. employees. Seventy-four percent of professionals reported they operate while tired at least somewhat often. 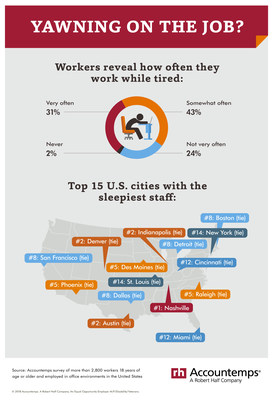 Workers were asked, "How often do you work while tired?" Their responses:

According to the research, the sleepiest city is Nashville, followed by Austin, Denver and Indianapolis. View an infographic of the 15 cities that have the highest percentages of professionals who are exhausted on the job.

"Though often overlooked, sleep is a critical component of producing good work. Errors and ineffectiveness can occur when team members are running on empty," said Michael Steinitz, executive director of Accountemps. "Consider the underlying causes of why employees are sleepy. If it's because they're stretched too thin, retention issues could soon follow."

About the Research
The online survey was developed by Accountemps and conducted by an independent research firm. It includes responses from more than 2,800 workers 18 years of age or older and employed in office environments in 28 major U.S. cities.

About Accountemps
Accountemps, a Robert Half company, is the world's first and largest specialized staffing service for temporary accounting, finance and bookkeeping professionals. The staffing firm has more than 300 locations worldwide. More resources, including job search services and the company's blog, can be found at roberthalf.com/accountemps.