More Than Half Of Professionals Know Someone Who's Skipped Work The Day After A Major Sports Event
- Calling in sick or making an excuse for not going to the office following a big game is the top distracting behavior
- Managers in Cleveland, Denver and Chicago are most annoyed by staff absences after sporting events

MENLO PARK, Calif., Jan. 24, 2019 /PRNewswire/ -- Employee absenteeism after major sports events like the Super Bowl is on the rise, suggests new research from staffing firm OfficeTeam. More than half of professionals (54 percent) know someone who's called in sick or made an excuse for skipping work following a big game. That's up from 41 percent three years ago. In a separate survey, senior managers identified playing hooky the day after (42 percent) as the most distracting or annoying employee behavior when it comes to sports, a 20-point jump from a similar survey in 2017. 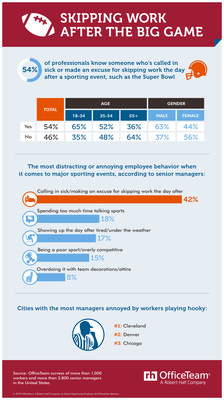 View an infographic about sporting events and work.

Workers were asked, "Do you know anyone who's called in sick or made an excuse for skipping work the day after a sporting event, such as the Super Bowl, NBA Finals or World Series?" Their responses:

Senior managers were asked, "Which of the following is the most distracting or annoying employee behavior when it comes to major sporting events?" Their responses:

"It's easy to get drawn into the excitement of major sports events," said Stephanie Naznitsky, executive director of OfficeTeam. "Employees can do their part to keep it business as usual by giving advance notice if they want to take a day off, keeping game discussions to a minimum, and following company guidelines for things like breaks and fan gear."

Naznitsky added, "Managers may cut their workers some slack leading up to and after a popular event by offering schedule flexibility or organizing group activities to celebrate. It's also a good idea to contact a staffing firm to help cover employee absences."

About the Research
The online surveys were developed by OfficeTeam and conducted by independent research firms. They include responses from more than 1,000 U.S. workers 18 years of age or older and employed in office environments and more than 2,800 senior managers at companies with 20 or more employees in 28 major U.S. cities.

About OfficeTeam
OfficeTeam, a Robert Half company, is the nation's leading staffing service specializing in the temporary placement of highly skilled office and administrative support professionals. The company has 300 locations worldwide. For additional information, visit roberthalf.com/officeteam. Follow roberthalf.com/officeteam/blog for career and management advice.