Half Of Workers Surveyed Have Quit Due To A Bad Boss
- Sacramento, Miami and Tampa have the largest numbers of professionals polled who have resigned because of a challenging manager
- Younger employees were more likely to leave bad bosses, study found

MENLO PARK, Calif., Oct. 8, 2019 /PRNewswire/ -- New research from global staffing firm Robert Half suggests there's truth to the saying, "People leave managers, not companies." About half of professionals surveyed (49%) have quit a job due to a bad boss. 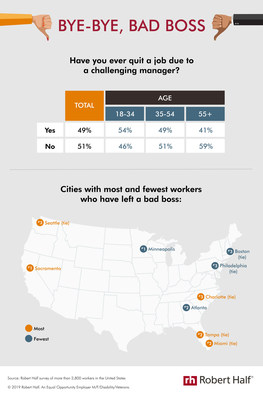 Among the 28 U.S. cities in the study, Sacramento (66%), Miami and Tampa (58% each) had the most workers who departed because they didn't like their supervisor.

View an infographic of the bad boss findings by age and city.

"We've all heard horror stories about difficult managers — or experienced one firsthand," said Paul McDonald, senior executive director for Robert Half. "Work styles and how well a person gets along with their supervisor can determine whether someone decides to join or remain at a company."

McDonald added, "Many times open communication and training can help to resolve issues and strengthen the professional relationship between bosses and their direct reports. Employers should also commit to regularly gathering feedback on managers and developing the skills of new or potential leaders."

About the Research
The online survey was developed by Robert Half and conducted by an independent research firm. It includes responses from more than 2,800 workers 18 years of age or older and employed in office environments in 28 major U.S. cities.