7 In 10 Companies Plan To Expand Tech Teams In First Half Of 2020; Project-Based Hires A Priority As Talent Pool Remains Tight
- 86% of technology leaders say it's challenging to find IT talent, according to Robert Half Technology research
- Houston, Miami, Austin and Charlotte are top cities adding to their technology teams
- Almost all IT hiring managers plan to bring on interim professionals

MENLO PARK, Calif., Dec. 10, 2019 /PRNewswire/ -- Technology recruitment will grow in the first half of the new year, but hiring challenges persist, suggests a new survey from staffing firm Robert Half Technology. According to the latest State of Tech Hiring research from Robert Half, 69% of IT decision makers anticipate expanding their team in the next six months, up two points from the second half of 2019. 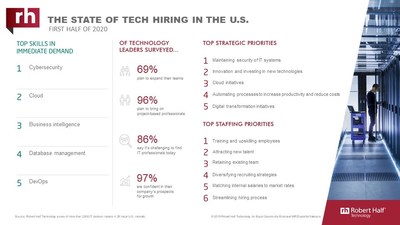 Respondents cited the following technical skills as immediately needed for their organization:

Nearly all IT managers polled (96%) said they plan to bring on interim professionals. Of those, 60% say hiring project-based IT employees is part of their overall staffing strategy and 58% will look to temporary staff if a role becomes vacant and isn't filled quickly.

"Savvy organizations are shifting their hiring strategy given the growing demand for IT professionals and adapting to the increasing challenges brought on by talent shortages," said John Reed, an executive vice president with Robert Half.

Reed added, "Aside from a competitive salary and attractive organizational culture, training can be a strong draw for IT staff. Tech professionals are constantly looking for ways to expand their skill sets, and providing development opportunities can be a meaningful differentiator in a competitive hiring environment."

Below, technology leaders ranked their top three strategic and staffing priorities for the first half of 2020:

View infographics of national hiring plans and the results by city.

Hiring plans across the U.S.
Almost all technology leaders surveyed (97%) are at least somewhat confident in their company's prospects for growth in the first half of 2020, and hiring plans remain robust across the map. The table below shows percentages of technology managers from 28 U.S. cities who expect to add to their teams in the first half of 2020:

About the Research
The online survey was developed by Robert Half Technology and conducted by a leading independent research firm. The biannual report is based on responses from more than 2,800 IT decision makers in 28 major U.S. markets. Respondents were screened to have hiring authority for the information systems or information technology department of a company.