How To Lose A Candidate In 10 (Business) Days
One-Third of Companies 'Breadcrumb' Job Applicants, Robert Half Research Shows
- Businesses in San Diego, Boston and Dallas are most likely to drag out the hiring process
- 62% of professionals lose interest in a job if they don't hear back within two weeks of the initial interview

MENLO PARK, Calif., Feb. 10, 2021 /PRNewswire/ -- Competing for a job in today's market is challenging enough, and new research from global staffing firm Robert Half shows there's another hurdle for candidates to overcome: being breadcrumbed — or strung along — by employers. One-third of senior managers surveyed said their company is taking more time to hire in the current environment despite having access to a deeper talent pool. When asked to reveal how they keep candidates engaged during the hiring process, common responses included scheduling multiple rounds of interviews, conducting skills testing and keeping applicants busy with online training. 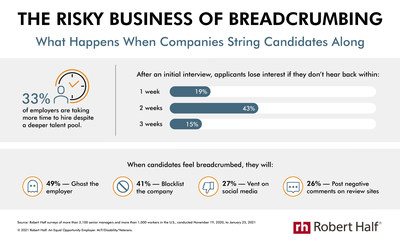 Where Candidates Are Most Likely to Be Strung Along
According to the research, which looked at 28 U.S. cities, breadcrumbing behaviors may vary by region.

"By stretching out the hiring process, companies waste critical time and resources and may lose out on the best talent," said Paul McDonald, senior executive director at Robert Half. "Employers who are transparent with candidates and move efficiently through the process will create a positive experience for potential hires and gain a recruiting edge."

Candidates Won't Wait Long
In a separate survey, 62% of professionals said they lose interest in a job if they don't hear back from the employer within 2 weeks — or 10 business days — after the initial interview. That number jumps to 77% if there is no status update within 3 weeks.

Workers also revealed what they would do if they felt they were being breadcrumbed by hiring managers:

McDonald noted, "Employers who don't treat candidates with the same level of courtesy they expect may face consequences, including burned bridges with potential hires and a tarnished reputation, both of which can negatively impact future recruiting efforts and business growth."

For tips on speeding up the hiring process and securing top candidates before they lose interest and pursue other opportunities, visit the Robert Half blog.

About the Research
The online surveys were developed by Robert Half and conducted by independent research firms from November 19, 2020, to January 25, 2021. They include responses from more than 2,100 senior managers whose organization hired new staff during the pandemic and more than 1,000 workers 18 years of age or older at companies in the U.S.