Hiring Mistakes Come At A Higher Price Amid Pandemic
64% of Employers Report the Cost of a Bad Hire Has Increased From One Year Ago, Robert Half Research Shows

MENLO PARK, Calif., March 16, 2021 /PRNewswire/ -- Companies today have more at stake if they make a hiring mistake, new research from global staffing firm Robert Half shows. More than 3 in 4 senior managers surveyed (76%) admit to recruiting the wrong candidate for a role, and nearly two-thirds (64%) said the negative impact is more severe now than it was a year ago. 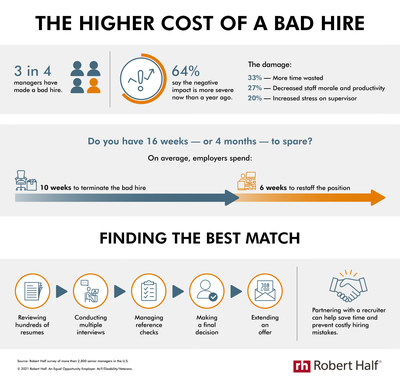 Four Months Lost on One Hiring Mistake
When it comes to their most recent regrettable hire, senior managers said it took 10 weeks, on average, to realize the person was a poor match and to let them go, and an additional 6 weeks to restaff the role. That's a total of 16 weeks, or 4 months, of time squandered on a recruiting blunder.

Where Companies Waste More Time
According to the research, which looked at 28 major metropolitan U.S. cities, some employers take even more time to correct a hiring mistake:

"In the past year, companies have made big transitions, including the move to remote work and shifts in their hiring and onboarding practices," said Paul McDonald, senior executive director at Robert Half. "When faced with so many changes, there can be more room for error and, unfortunately, a bad hiring decision can have a ripple effect throughout the organization."

What's at Stake for Employers
Senior managers reported the biggest tolls on their teams and company as follows:

McDonald noted, "Common hiring mistakes can be prevented by establishing an effective and efficient candidate evaluation process and working with outside partners to expedite time-consuming steps and help secure the best match."

For tips on avoiding the most common hiring mistakes, visit the Robert Half blog.

About the Research
The online survey was developed by Robert Half and conducted by an independent research firm from November 19 to December 18, 2020. It includes responses from more than 2,800 senior managers at companies with 20 or more employees in the U.S.